Newly crowned Miss USA Nia Sanchez is a fourth-degree black belt in taekwondo and says women should be able to defend themselves as a way to battle the problem of campus rape.

The 24-year-old from Las Vegas said bringing awareness to the issue is very important.

Sanchez beat out 50 other contestants from all the states and the District of Columbia on Sunday night for the title of 63rd Miss USA.

First runner-up was Miss North Dakota Audra Mari. Sanchez will go on to represent the U.S. at the Miss Universe competition later this year.

Sanchez why she thinks the issue is being swept under the rug and what should be done about it.

Sanchez said women need to take it upon themselves to learn how to defend themselves. After being crowned, Sanchez told reporters she lived for a time in

a women’s shelter at a young age with her mother and at age 8 took up taekwondo to learn self-defense and build her confidence. 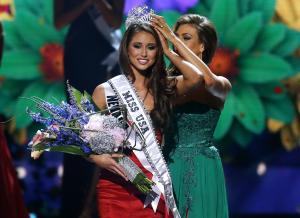